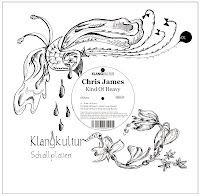 And from a brand new UK-based label, we move to a German imprint that's reached the grand old age of release number three!

Headed up by Dirk Hermann and Andreas Mueller, Klangkultur Schallplatten are based in Cologne, but this particular offering comes from Chris James, who hails from much closer to home (Birmingham). His original version of Kind Of Heavy lives up to its name, based as it is around a large, chunky yet still somehow understated bass riff, topped with breathy fem vox.

Stepping up to the plate on remix duties we have two names that will be very familiar to TIWWD readers. OFF Recordings boss Andre Crom supplies a more stripped, percussive rub that puts the bass riff through some kind of sonic mangle and adds gloriously squelchy synth stabs, while Lost My Dog fave Dale Howard comes (as is his wont) with the rich, garage-y vibes, adding a second, male vocal part to boot.

It's Dale's rub that stands out for me but there are strong mixes here to suit a range of floors.

About: Despite putting out just three releases to date, Klangkultur Schallplatten was founded in 2010 so they're definitely going down the 'quality not quantity' route! Find 'em on Soundcloud, on Facebook or at their own website.
Posted by Russell at 15:28