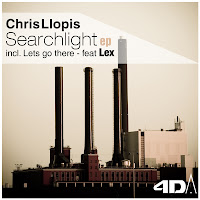 Some quality grooves from a label I don't think have featured on TIWWD before, 4DigitalAudio.

The EP's made up of Searchlight itself, plus three mixes of Let's Go There. The former is a tuff, chuggy and dark-ish tech-houser, while the Original of the latter operates in similar territory but has a spoken male vocal. James Monro's rub heads in a more overtly 'techno' direction, but it's the Dysfunctional Disco Remix that takes top honours for me. Sitting right on the deep house/deep techno border, it's sparse and glitchy yet retains the funk in a way similar to how some of the more experimental two-step used to.

About: You can find 4DigitalAudio at their own website or on Soundcloud.
Posted by Russell at 16:18