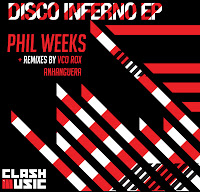 Phil Weeks gets down with his disco bad self here, in the company of Brazilian label Clash Music.
The original of Disco Inferno kicks off with two and a half minutes of not particularly discofied rolling deep house bits, before in comes the "dance, dance, dance" vocal (not the Chic sample you might be thinking of, BTW). Another scat-style, much deeper male vocal then starts "b-b-b-bom-bom"-ing away in the background and… er, well that's it basically. This is disco-y, but in the most tracky, house-y way possible, sounding a little like the dub of something by Weeks' recent collaborator DJ Sneak. But that's by no means a bad thing.
Remix-wise, there's a VCO Rox Safadinhas Remix and an Anhanguera 90s School Remix. The former drops a lot of the vocal but adds a big raw-sounding b-line and some twiddly space-disco synths, while the latter ups the dancefloor ante a little with sax parps, and stabs that make me think of Gusto's Disco's Revenge.
Three solid cuts that I'm probably not doing justice to right now – I'm tired – but that will get booties shaking on the floor without a doubt.
Out: This week
About: Clash Music's website is here, or here's their Soundcloud (where you can HEAR THIS). Also, here's what the hype sheet has to say about the remixers involved:
Anhanguera from Sao Paulo, Brazil are Dudu Palandre and Décio Deep - a duo at the forefront of a new generation of funky and jackin' house producers. They have released several tracks through labels such as Robsoul, Minority, Shak Digital, Guesthouse and Good Family. Their music blends classic disco, jazz and hip-hop samples with funky bass lines and fat beats - always sexy, groovy and driving.
VCO Rox complete the Sao Paulo-focused line up. Paula Chalup and Eduardo Marote have been honing their joint live show since 2010 which maintaining solo DJ careers in Brazil, Europe and America. Morate is well known as Prztz (and member of Jamanta Crew) who's releases for labels such as Classic, Robsoul and .dotbleep were hugely popular in the mid 2000's.
Posted by Russell at 21:25