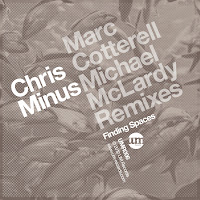 Only the sixth release from UM Records, this features two originals from Danish producer (always with the Danes at the moment!) plus a trio of remixes from Marc Cotterell and Michael McLardy.

"In the deepness you will find your way," goes the vocal on Finding Spaces… which should, in and of itself, give you a pretty good idea of the kind of laidback, late-night gem to expect. Drifting Along is a little more obviously floor-oriented, with what sound like Hammond organs parping away and a whispered "Do you catch my drift?" vocal.
Cotterell's Lost In Space mix takes Finding Spaces to the floor on a saxed-up, west coast-y ride, while his Late Night Mix of the same is a stripped-down beauty for the afterhours. And finally, in McLardy's hands Drifting Along becomes a somewhat techier, drummier affair, though without losing those killer organs.
From the peeps behind the excellent Deep House Facebook page, you kind of expect good things… and they deliver.
Out: This week
About: As well as the page mentioned above, there's a separate UM Records Facebook page, and you can also find 'em on Soundcloud or at their own blog
Posted by Russell at 19:14