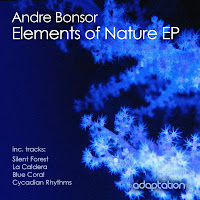 Some disco-tinged deep house goodness here from Andre Bonsor, who you might know better as one-half of the mighty Schmoov!.

I've actually got another Andre Bonsor release sat here as well, a collab' with Adaptation boss Tom Conrad… but we'll get to that in due course! In the meantime, this one's a four-track affair taking in various shades of deep. Opener Blue Coral is a blissed-out, Balearic kinda thang with some nice vibes action and vintage-sounding synth stabs. La Caldera has a sexier, garage-y feel with its warm Rhodes chords and hip-swayin' beats. Silent Forest takes us into post-club deep house territory, a driftaway disco-flavoured number to float off into outer space to, and then finally Cycadian Rhythms [sic] is another wiggy instrumental that could find favour with deep house and nu-disco heads alike.
Strong stuff all round… but then with Andre's background we'd expect no less.
Out: This week on Traxsource only, then everywhere else in April
About: This comes on the aforementioned Adaptation Music
Posted by Russell at 17:13