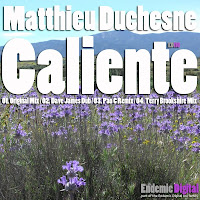 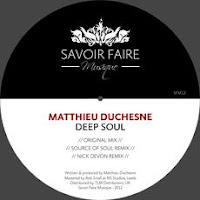 Not one but two singles from rising French producer Matthieu Duchesne this week, with Caliente coming on Endemic Digital and Deep Soul on Savoir Faire Musique.

Turning our attention to Caliente first, then, in its original form this is a driving, uptempo, Spanish guitar-flecked houser that's got 'Beefa written all over it. Which is fine, and the slightly deeper remixes from Pao C and Terry Brookshire are even better… but the stone-cold killer for me is the uber-deep Dave James Dub. But then Dave James can pretty much do no wrong for TIWWD at the moment!
Moving on to Deep Soul, here we have another somewhat Balearic-tinged original, albeit this time it's a deeper, more shuffly affair, built for sun-up/sundown play. The remixes this time come on more like alternative versions rather than doing anything radically different, if you see what I mean, but if pushed I'd go for the Nick Devon Remix, which brings the track's dreamy, soulful side to the fore.
Overall though, with high quality production throughout and a range of mixes to choose from, taken together these two releases definitely mark out Duchesne as a name to keep an eye on.
Out: This week
About: To find out more you can find Savoir Faire Musique at their own blog, or hit up the Endemic Digital website
Posted by Russell at 15:50