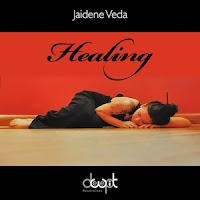 It's possible, I guess, that some TIWWD readers are just too young to remember that late 90s Naked sound, that soon became that early 00s Om sound… then again, I'm also guessing that you're a knowledgeable lot, so even if you're unencumbered by years, you should still know exactly the kind of 'mellow deep house with floatily soulful female vocals' that I'm on about.

Well, you don't hear so much of it these days. But that's pretty much what you've got here – Healing was in fact recorded in 2002 but never released – and it has to be said, now we're not being deluged with the stuff, it is sounding rather lovely. Producer Micah Lukasewich wisely avoids slanting the track in the overtly poppy direction that some such material at times headed in, resulting in a cut that, while it certainly wouldn't sound out of place on one of those beach house/Ibiza chill-type comps that rear their blissed-out heads every summer, would cut the mustard equally well on the dancefloor, at least in the soulful house joints. And only in the warm-up. But you get the idea: they've managed the 'accessible but credible' thing here and that's no mean feat.

Just the two mixes to choose from, a self-explanatory Vocal and Dub, and just to be on the safe side I'd probably plump for the Dub myself (which comes with a little extra help from Pete Morris, of The Rurals fame). But yeah, this is nice, without being all 'nicey nice', if you see what I mean. And, the last sentence notwithstanding, Ms Veda's full vocal IS something of a Tracey Thorn-ish delight.

About: Jaidene Veda is no stranger to the deep/soulful house scene, having previously worked with the likes of Glenn Underground, Jimpster, Joe Claussell and Josh 'Blaze' Milan. There's apparently work in the offing with Ralf Gum, too.
Micah Lukasewich I can tell you less about, but I CAN tell you that this comes on Denmark's DeepWit, so you can no doubt find out some more at their website, Facebook and Soundcloud.
Posted by Russell at 20:36