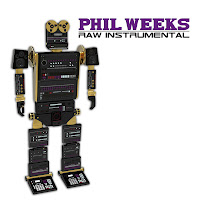 Right now I seem to be just the teensie-tiniest little wee bit behind with Every Bastard Thing In The Whole Godforsaken World. So, sorry, but just the one review 4 ya tonight! It's a goodie, though. The record, I mean. Not my writing. That'll be just the usual drivel I'm afraid.

Phil Weeks' third album sees him once more getting a little bit crazy with the samples, and taking in styles ranging from sleazy nouveau funk to filter disco to pumping dancefloor-oriented house. A big, squelchy bassline is never too far away, and nor is a sizeable chunk of film dialogue, as the French producer puts his Akai MPC3000 to work lifting chunks from movies including Godfather 2, How High and Foxy Brown.
The highlights for me come towards the album's end, with the off-kilter looping, stoned groove of downtempo number Oh Yeah, the thumping bass workout of On Da Raw and the old-skool jackin' acid house vibes of Do That Dance. The latter two feature on a four-track sampler EP that should also be out round about now, I believe.
I know everyone raved about the more soul-oriented Love Affair last year, and yes it was very good, but I'm gonna come right out and say it – I think this album's better.
Out: Last week, but see above re: being a bit behind…
About: This is on Weeks' own Robsoul Recordings label
Posted by Russell at 23:01