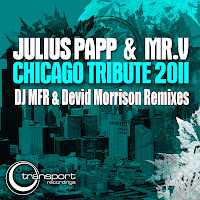 The weekend's here! So now seems like an appropriate time to talk about this unashamedly old skool, good-time house cut from two latter-day house legends.

You should know the track already – I reviewed it on here last year when it first came out, albeit only in one of the round-up things I think, or was it on an album? Either way I can't seem to find the review right now but I know I did one! – but now we have four new mixes of it, from Devid Morrison and DJ MFR. To jog your memory, it's the one with Mr V reminiscing about the early days of house and talking about "that sound, that freedom, that feeling we had".
Morrison's mix adds a little tropical/Latino flavour to the track, with busy shakers and the like, but it's the DJ MFR Deep Mix that's doing it more for me, a stripped-down and dubby pass that throbs along nicely. Both mixes come with instrumentals, which is handy cos while I'm personally something of a fan of Mr V's Tyree Cooper-esque vocal stylings, not everyone else is.
It all adds up to a very solid bet of an EP. House music all night long.

Out: This week, I'm assured… whatever the cover might suggest!

About: This comes on DJ MFR's San Francisco-based label Transport Recordings, who should need no introduction from me! Here's their website.
Posted by Russell at 18:28