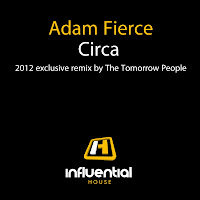 Quite often we have some nice mellow deep house vibes to ease into the week on a Monday… this week, let's do the opposite and jump straight in at the 'fierce' end!

I'll be honest and say I don't know/remember the original version of this track, but in the remix presented here by Tomorrow People, AKA Scott Langley and Alan 'Jinx' Chamberlain, it's a rollicking uptempo vocal stomper, wearing its 90s influences clearly on its sleeve, but underpinning the looping "you got the beat" diva vox with the tougher, techier beats required for a more contemporary feel.

Firing stuff made for moving bodies on peaktime dancefloors.
**UPDATE 20/2: Please note that's Scott LANGLEY, not Scott Harrington as I said previously. Thanks to SH for pointing out the mistake.

Out: Today
About: This comes on London label Influential House and there's just the one mix promo'd… whether there are any more in the pipeline I don't know, but you might want to keep an eye on the Influential House Facebook and MySpace pages just in case.
Posted by Russell at 20:22