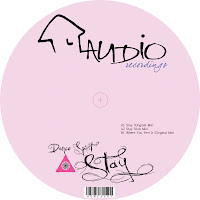 Surprising, then, that there's little in the way of classic Chicago house sounds here, and not a lot that's particularly techno-fied either! Instead, Stay is a multi-layered and very now-sounding deep house production, moving along at today's lower tempo and with that currently hot mix of slightly tech-y beats and soulful vox. Gotta say the male vocal's a little too soulful for my tastes these days though – there was a time I'd never have said that – so for me it's all about the Dub. Which is, it has to be said, rather sumptuous.
On the B, Where You Feel It is a more upbeat affair, again with the soulful male vox and, this time, with a relentlessly throbbing synth hook to draw 'em in. Again, though, personally I'm feeling the dub over the vocal mix… but with soulful vocals all the rage, this should go down well in the clubs.
Out: This week
About: Find out more at the Home Audio blog, Facebook and Soundcloud pages.
Posted by Russell at 20:22