Raffa L – I Want You 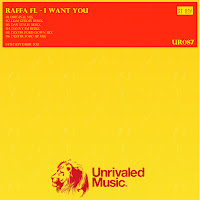 Blimey… I know Unrivaled Music get a lot of love on this blog but they've excelled themselves here!

There are six mixes of I Want You on offer. In its Original form, it's a chugging deep/tech house groover with a slightly Robert Owens-esque, treated male vocal, 90s organ sounds used quite subtly and some seriously buzzy rave bass. And then as for remixes… you're spoiled for choice, really. There's the (UK) garage-y refix from Liam Geddes. There's Danny eM's head-fried, wibbly pass. There's a tuffer, techier rub from Dan Styles.

And then there's not one but two outstanding mixes from Dexter Ford. His Up Mix really lets that rave bass shine through and teams it somewhat surprisingly with nu-disco synths, with great results. But his Down Mix… that's as satisfying a journey into inner (head) space as you're gonna take all week, a dubby affair with the production aesthetics of deep techno, the sexy slink of deep house and STILL with that buzz bassline in full effect.

The latter pass, as you can probably tell, takes top honours for me, with Geddes' rub a close second. But this is outstanding stuff all round, truth be told – go seek.

About: You can find Unrivaled via the Endemic Digital Facebook page.
Posted by Russell at 13:56