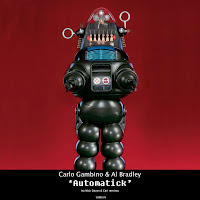 I've deliberately saved this till last tonight, cos it's the best of what has been a very fine bunch all round.

At least, it is if you're old, because the minute you hear the vocal you'll be grinning from ear to ear! On Automatick, you see, this pair of cheeky Yorkshire scamps have brazenly lifted the vocal from Dee D Jackson's minor 1977 disco hit Automatic Lover… better known to those of us who spent the early 90s dancing on podiums, hugging strangers and blowing whistles as Friends Of Matthew's Is There Anybody Out There? Which means that if you ARE a househead of "a certain age" then this record is pretty much impossible not to instantly fall in love with.

Musically, it's actually a very contemporary-sounding slice of deep/tech house coming complete with a slightly more disco-fied pass from Nick Devon and a marginally tuffer/techier Ceri rub. Which left me wondering, what would an 18yo clubber today – who wasn't born when Friends Of Matthew soundtracked a million and one stranger-hugs – would make of it? And then I remembered how blown away I was on hearing Is There Anybody Out There? for the first time, and decided that to young, fresh ears this will probably sound just as good now as that did to me, then. So everyone's happy.

For many reasons, TIWWD doesn't do a 'tune of the week' or anything like that. But if I did, this'd be it without a doubt. Utterly, utterly crucial.

Out: This week on Beatport, everywhere else from 1 Oct.

About: Despite Carlo getting top billing this comes not on his own Midnight Social but on Al's own 3am Recordings, who live on Soundcloud and Facebook mostly.

Incidentally, hearing this made me wonder who Friends Of Matthew actually were, given that we never really heard from them again… and it turns out two of them were Mike Grey and Jon Pearn (pre-Hustlers Convention even, never mind Full Intention). Every day's a school day, eh?
Posted by Russell at 21:41