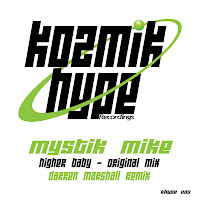 There's just the two mixes of Higher Baby. In its original form, it's a vaguely disco-leaning peaktime dancefloor cut, with a rolling funky bassline, space-y synths, luxurious pads, parping sax and echo-ing, garage-y fem vocal snips – Joey Negro would be proud! On the B, the Darren Marshall Remix is a slightly tuffer, dubbier pass, with yet more nods to classic garage in its swung rhythms.

I think Marshall's rub nudges it for me but both mixes are very playable.

About: This is only the third release from Kozmik Hype, who can be found online at their own website, on Facebook or on Soundcloud.
Posted by Russell at 13:15