Enigma Dubz - How It Is EP 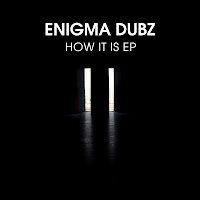 This is one of the bits I didn't get round to last week, but a) I'd been feeling bad about that, cos it's really rather good, and b) the Geddes rub of Raffa L has put me in a garage frame of mind. So here we are.

In its Original form, How It Is is probably best filed under 'future garage', with its long, dreamy intro, looping, cut-up male vocal sample and busy, 2-step-ish rhythms, though unlike a lot of such tackle it's also pretty energetic and upbeat.  Elsewhere on the EP, Feelings Gone operates in more typical late-night future garage territory while We At War is perhaps better described as UK bass/post-dubstep. Rounding out the EP, Dancing In The Dark is an excursion into the dubbiest of late-night pastures, and one to melt into the sofa to.

A very strong EP all round.

Out: Last week, but what's seven days between friends?

About: This comes from the slightly mysterious but always checkable Four40 Records, who can be found on Soundcloud and Facebook.
Posted by Russell at 14:07