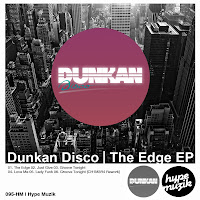 Something of a surprise release from Hype Muzik here, as a label better known for progressive and tech-house grooves gets its disco shimmy on.

There are five tracks and six mixes in total, and they do vary quite a lot. The Edge itself and Just Give are slo-mo, Balearic-type numbers that'll appeal to the nu-disco beards, Groove Tonight (coming in two mixes) is more yer Joey Negro/Sunburst-style disco house, while Lady Funk has a chopped-up, almost garage-y feel. But perhaps the most notable cut here is Love Me… which stands out for its sheer audacity in basing itself around a riff that owes not a little to Rod Stewart's Do Ya Think I'm Sexy?

And I'm aware that might sound like a terrible idea. But listen to the track and you'll see that it definitely isn't, as Dunkan adds heavily-filtered vox to create a nu-boogie gem that wouldn't sound out of place on the likes of Nang, Permanent Vacation or Bear Funk.

A departure for Hype, then, but a very successful one.

About: Hype Muzik is of course part of Norman H's Stripped Digital empire
Posted by Russell at 13:07