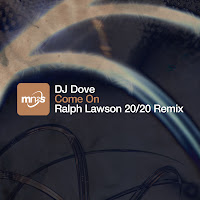 Not sure how much reviewing I'm gonna get done today, gotta go out later, so we'll start out with a nice easy one cos there's just the one mix!

But there's a story to go with it as well. DJ Dove's Come On originally came out on Milk N' 2 Sugars (as it was then) way back in 2000, complete with this Ralph Lawson remix. But somewhere along the way the masters went missing, with the result that the track's never been available digitally.

Until, as they used to say on Tomorrow's World, now. Because said masters recently surfaced on an unmarked DAT when one of the MN2S crew was moving house, and as a result, this sumptuous slice of languid, soulfully-tinged deep house – which has something of a paddy, west coast-y feel to it, unsurprisingly given that back in 2000 Naked, Salted and Om were as red-hot as [insert hipster label of your choosing] are today – is now available for your digital purchasing pleasure.