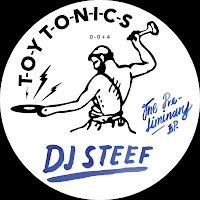 And from past masters of deep house, to some forward-thinking bizniss from Berlin's cutting edge.

This is only number four from Toy Tonics but they've already managed to attract the likes of Hard Ton and Dimitri From Paris to their door. Here though it's the turn of French producer DJ Steef, AKA Frédéric Berthet, who serves up six tracks of contemporary deep house with a heavy dose of disco coursing through their veins. All six tracks will work well on the hipster floors, but of especial interest to TIWWD's ears are Venusian Missing and Nocturne. The latter has an off-kilter jazzy/lounge-y feel, while the former tops off its mellow, late-night grooves with a very familiar vocal rendered in a falsetto stylee.

As such, these two would go down as well on older, more 'purist' deep house floors as they would with the kids with the silly haircuts. And that's got to be a result, surely?

About: You can find Berlin's Toy Tonics label at their own website, on Facebook and on Soundcloud.
Posted by Russell at 14:29