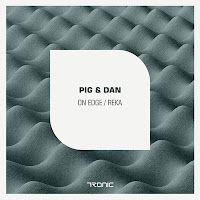 I know what you're thinking… right about now is the time I should be doing a round-up of other stuff from last week. But I'm tired, so I'm gonna save that and crack on with this week's releases for now…

Starting with this simple two-tracker from Pig & Dan, which sees the duo firmly esconced in the tech-house territory they've been making their own of late. On Edge itself really ain't NOTHING but a chuggin' midtempo groove, but sometimes that's all you need, n'est-ce pas? On the flip, Reka works busier percussion, techno synths and proggy flourishes for a White Isle-friendly feel.

I suspect the latter might be the one that gets more plays, being a tad more immediate/accessible, but it's On Edge that stands out for me… that said, both are pretty strong. P&D don't make tracks that aren't.

About: This comes on Christian Smith's Tronic Records
Posted by Russell at 21:49