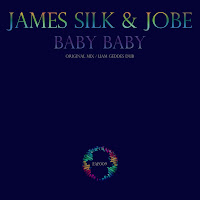 And from one of TIWWD's most-tipped of 2012 (Dave James) to another, James Silk, whose latest for Form-and Function doesn't disappoint one iota.

In its Original form, Baby Baby is all chunky bass, crisp kicks and earnest male vocal… a big room peaktime vocal anthem in the making, quite possibly. It also wouldn't have sounded out of place on Cleveland City circa 1994! But it's actually the flipside refix from Liam Geddes that's exciting yours truly more.

With the vocal cut down, chopped up and recycled in stab form, this is as chunky, sumptuous and beautiful a slab of, let's not beat about the bush, UK garage music as you'll hear this month AT LEAST. A proper locked-down underground soul bumper for the deep heads, don't sleep!

About: You can find Form-and Function on Facebook and Soundcloud.

**UPDATE 13/9: Please note Jobe is co-producer of this record and NOT the vocalist as I suggested yesterday!
Posted by Russell at 23:27