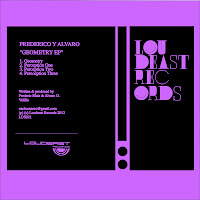 For no reason in particular, not feeling hugely inspired to do a lot of reviewing/writing tonight but the show must go on and all that so I think I can find time to tell you about this one…

A four-track EP, it comes from no less a personage than Fred Everything, working under his real name (Frederico Todos) for once alongside his buddy, Modern Electrics label boss Alvaro Velilla. And the results of their joining forces are pretty impressive, to be fair. Geometry itself is a deep, techy chugger but in a lush, musical way that hints at Fred's background in more soulful pastures. Oh yeah, and an intro that's not a little reminiscent of the opening drums on Sympathy For The Devil.

And if deep, techy chug with a lavishly produced feel sounds like fun to you then you're in luck, cos the three versions/mixes of Perception are just as good… in fact Perception Two with its sparse, crisp percussion and Blackwater-esque synth runs is probably the standout of the EP for me.

But 'deep, techy chug in a more musical style than you might normally expect' is about as close as I can describing the whole thing… tonight, anyway.

About: This comes on Nacho Marco's Loudeast label. They seem to mostly live on Facebook.
Posted by Russell at 22:41