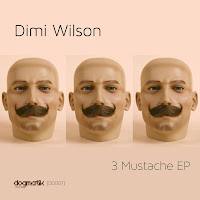 Greek producer Dimi Wilson comes to Alex Arnout's Dogmatik Digital, and does so with some considerable panache.

What you get are four tracks, five mixes, all in a general vein of 'deep/tech house that's so now-sounding it almost hurts'. I mean that in a good way though, not in a sneery "ooh look at him being all hip" way! Musically the tracks are all tuff-ish and variously pulsing, throbbing, bouncy and shuffly, but where they REALLY vary – cos we're talking some fairly subtle distinctions there – is in the choice of accompanying vox.

Moustache features a chopped-up male R&B vocal, while Ice P uses a heavily-treated vocal from some rapper or other… yeah, I know who it sounds like it should be from the title but the voice is so distorted it's hard to tell who it is or what he's on about, except he says 'bitch' and 'nigga' a lot and generally sounds a bit irate. Never Looking Back has a hip-house style vocal, while Spanish Girl… well, that one's obvious.

But for all that, it's actually the Dub of Never Looking Back that's pushed this one to the top of the pile tonight. It's a sparse, pulsating monster of tech-fuelled deepness, tailormade for locked-on late-hours floors… and, most importantly, it's graced quite generously with pyow-pyow-pyow, Negro-esque space disco stabs.

And that's pretty much my favourite sound in the world, which makes this utterly essential in my book.

About: You can find Dogmatik on Soundcloud, on Facebook or at their own website.
Posted by Russell at 23:04