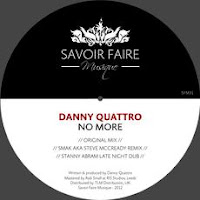 As with Patrick Podage & Buraq's A Piece Of Paper EP a couple of weeks back, this is a bit techier than we've come to expect from Savoir Faire Musique. But perhaps not as much so as that one was.

In its Original form, No More is a tuff-ish, chuggy affair with one of those very 'now', very treated and breathy vocals. But if that doesn't take your fancy, fear not cos a brace of TIWWD faves do the remix honours in style. Steve McCready AKA Smak takes us into throbbing, loopy and acid-tinged territory with a mix that cries out for dry ice, strobe lights and a basement, while if that's too techno-leaning for ya then Stanny Abrams' Late Night Dub is housier, with tribal-ish percussion and new female vocal elements.

Three quite different mixes then, but three solid floor-shakers all the same.

currently looking for demos on a more tougher, techier kinda vibe for our sub label which launches soon...demos to savoirfaireuk@gmail.com

PS Cos I was playing this, Quattro's previous offering Contact just came on after, the Lee Pennington Mix to be precise. I'd forgotten quite how good it was. So there's another one to check out if you didn't before.
Posted by Russell at 23:23