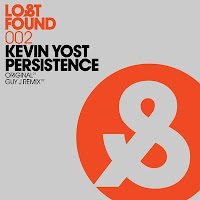 After yesterday's offering from Fred Everything, here we have another well-established producer known previously for more deep/jazzy/mellow shizzle getting his techy groove on.

There's just the two mixes of Perception to choose from. On the A, the Original mix is a squelchy, lo-slung deep/tech groover with acid squiggles galore and 'da funk' in spades… oh, and a torch-y female vocal of the kind you used to get on 'big in Ibiza' prog records ten years ago (think Black AM etc). It works, though. On the B, the Guy J Remix is a more driving, heads-down pass but still with the vocal in full effect.

It's the A that does it for me though: as with the Fred Everything track yesterday, it's got a musicality and warmth that's so often missing from similar tackle.

About: This comes atcha courtesy of Lost And Found, which is actually Guy J's own new label, with this only their second release. You can HEAR IT on Soundcloud, or find 'em on Facebook.
Posted by Russell at 22:29