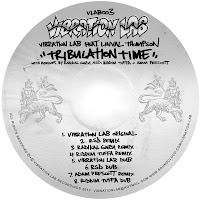 And from the dubwise flourishes on the Tony S single to this latest from 'future reggae' heroes Vibration Lab, who here serve up what's probably their most rootsical offering to date.

To recap, and for those that've just come in… 'future reggae' is the name coined by these two deep house stalwarts (Steve is connected to Peng Records, while Bazil used to co-run Bristol's long-running and much-missed Fruity Antics club night) to describe their fusion of reggae and dubstep. But on this latest single, featuring the legendary tonsils of JA's Linval Thompson, the dubstep influences are largely toned down… there are eight mixes to choose from so it does vary from mix to mix, but essentially we're in straight-up dub territory.

I'm not gonna go into each mix individually cos we'd be here all day, but they come from RSD, Radikal Guru, Riddim Tuffa, Adam Prescott and Vibration Lab themselves, and between 'em any selector of sensi-laden grooves should find themselves with plenty of options here!

About: Vibration Lab can be found on Soundcloud, Facebook and MySpace.