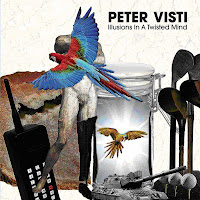 If you like your disco-inspired grooves with an arty, cerebral twist then this impressive long-player from Denmark's Peter Visti, coming on Bearfunk, should suit you down to the ground.

There are no idiot-friendly disco-house screamalongs or identikit glacial analogue Italo workouts on Illusions In A Twisted Mind. Instead, imagine the soaring strings of Philly and the stomach-churning basslines of late 70s/early 80s NYC art school punk-funk colliding with the ambient house/techno experiments of early System 7, topped off here and there with a few lines of spoken or whispered poetry, and you're somewhere in the right ballpark. As unlikely a ballpark as that might sound on paper!

As nu-disco goes, this is about as unobvious as it gets, and as such it won't appeal to everyone. It also might take a few listens to sink in… but it's worth exploring for sure, particularly (as I said) if your tastes veer towards the leftfield.

Out: Now (but only for a week)

About: You've got to love the fact that the 'About' bit on Bearfunk's Facebook page just says "Grrrrwr"! But once you're done chuckling at that, here's their website and Soundcloud page as well.
Posted by Russell at 21:30