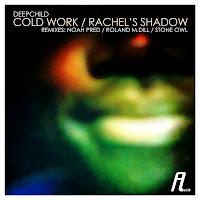 In its Original form, Cold Work is a bubblin', acid-tinged tech-houser that sounds like… well, I've never actually got a night train from Berlin to Hamburg, let alone while tripping. But if I DID ever get a night train from Berlin to Hamburg, while tripping, this is kinda what I imagine the view out the window might sound like. Stone Owl's Remix takes us into deeper, dubbier territory, so maybe this is the 'endless black fields' bit in-between the two sprawling sodium-lit metropolises… it's also probably my pick of the mixes.

Noah Pred's Subzero Remix is almost but not quite as deep and adds skittering percussion, while his Unfrozen Dub is so much predicated on said percussion that it's vaguely reminiscent of Azuli Black Label's more out-there experiments in ultra-minimal two-step back in the early 00s. As for Rachel's Shadow, here we're in deep, glitchy techno territory, while Roland M Dill's mix is a more dancefloor-leaning techno rub. Both will have their fans, but neither can top Cold Work for me.

About: Affin is the brainchild of German producer Joachim Speith. Hit up their website, Facebook or Soundcloud pages, or check out their show on Proton Radio.