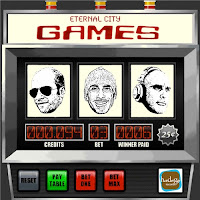 Just the second release here from Hadogy, the label headed up by Italy's DJ Haldo, known for his releases on the likes of Transport and Conya. Like the label's debut Come To Me, it comes from Eternal City – which is Haldo plus partners-in-crime Gianno Sponti and Dom 'Mod' Scuteri.

Basically, if you play house music at all, then you should find something to play here! Nice.

About: Here's the Hadogy website… they don't seem to go in for social media much, or at least not yet…
Posted by Russell at 21:18