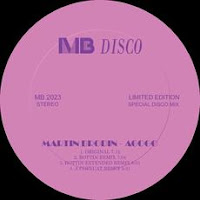 Some funk-fuelled nu-disco/boogie grooves here from Sweden's Martin Brodin, coming on his own MB Disco imprint.

There are four mixes of Agogo in total: the Original, two from Bottin and one from Copycat. The Original has a house-y feel at the start, a fat-ass b-line and carnival-esque percussion, while the Copycat Remix does much the same but with the housier sections truncated and the boogie bassline brought to the fore. For me, though, it's Bottin that takes top honours with his typically analogue-heavy take.

Look out for an album coming soon…

About: You can find MB Disco on Soundcloud and Facebook.
Posted by Russell at 13:16