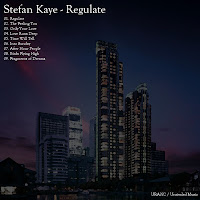 Stefan Kaye might be better known to you as Stefan K, but it seems there's another producer working under that name in Belgium, so now he's using his real name. And under his real name, he's just released his second album on Unrivaled Music, which I think follows on from 2011's Knowing You as Stefan K. Unless of course I've got it twisted and that was the OTHER Stefan K… anyway it's all kind of confusing so let's just concentrate on this album!

In his time, Mr Kaye has turned out both deep and progressive house grooves; the nine tracks featured in this set can generally be filed under the former heading, though there are tinges of prog here and there as well (on Fragments Of Dreams, for instance). Generally speaking, we're in late-night, afterhours or post-club territory, with muted kicks, lingering pads and ambient synth washes galore. Long, atmospheric intros abound, while vocals are pretty much restricted to a few disembodied 'oohs' and 'yeahs' that are layered into the mix rather than taking centre-stage.

In short: like the Spring Tube comp below, this is a fine collection of mellow house grooves that'll be best appreciated as you sit back on the sofa, inhale deeply and shut your eyes…

Out: Now – like I said, I'm playing catch-up a bit with albums at the mo'. But it only came out on 23 April, so you're not too far behind the curve if you grab it now!

About: Unrivaled Music can be found in the usual place.
Posted by Russell at 21:10