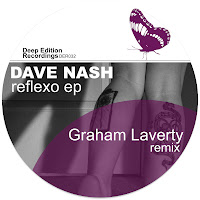 Some sad news today about Donna Summer… but the show, as they say, must go on. So first up tonight is this latest offering from Martijn's Deep Edition Recordings, the handiwork of a Portuguese producer who's previously had stuff out on Witty Tunes and Neurotraxx Deluxe, among others.

In its Original form, Reflexo itself is a fairly sedate deep houser with lush, lingering minor piano chords, rolling beats that are energising without being all up in your face, and floaty female vocal snips… it's got warm-up (or, with the 'Beefa season looming, sundown) written all over it. The UK's Graham Laverty swaps out the percussion for retro Chicago 909 kicks n' claps and adds some bowel-troubling bass rumble, resulting in a pass better suited to when they HAVE warmed up, while bonus cut Foolish brings the EP to a close, a slightly more uptempo cut again with Little Fluffy Clouds-ish sampled speech (kids talking about God, I think) that sounds like red lights and sweaty basements at 4am. Or perhaps, with the ’Beefa season looming, sun-up.

Solid stuff as ever from Deep Edition.