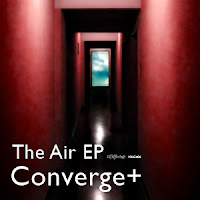 New on Nite Grooves this week comes this five-track EP from Japan's Converge+.

RGB kicks off proceedings, an exercise in Ibiza-friendly, Spanish guitar-laden chillage but with surprisingly tuff beats, making this just as at home on the dancefloor or by the poolside. There's no doubting where Moyura's meant to be heard, though: it's a dark and rumbling instrumental tech-houser made for the small hours, while Acrobat continues in a similar vein, but this time with tribal overtones and with some gently tweeting flutes, used quite subtly in the mix, bringing the light

Title cut Air then takes us back into more traditional deep house territory, with cleaner kicks and some piano action that I'd describe as 'hands in the air' if it wasn't so understated! Some nice sax parps on this one, too. And then finally Eclipse starts out as another drummy workout but then slowly adds in more of those melodic/Balearic elements found in the other tracks.

Air and Moyura stand out for me but it's solid stuff all round.

About: You surely must know where to find King Street, Nite Grooves and Street King by now!
Posted by Russell at 20:42