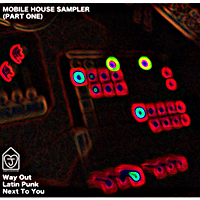 Okay, after that brief sojourn into blissed-out downtempo territory, we head back onto the dancefloor with three cuts of rollicking deep house from Brighton boy and free party veteran Jonny Loves House.

The three tracks are favourites from the Mobile House live set which JLH has been performing lately. Latin Punk is neither particularly Latin-influenced nor particularly punky, being instead a lively, struttin' affair with disco leanings and some great jazzy, tinkling electric piano. Next To You operates in very similar territory but now with the addition of female vocal cut-ups, before Way Out brings the EP to a close with an attitude-y, punk-funk-ish female vocal and more of those irresistible electric keys.

Solid stuff to get asses shakin' on deep house floors as you move towards peaktime.

About: This comes on Jonny's own Jonny Loves House label.
Posted by Russell at 12:58