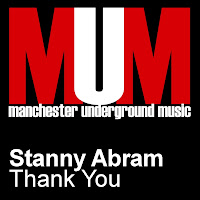 Yesterday we had What Happens boss Tim Andresen cropping up on Seamless Traxx… today, we have sometime What Happens artist Stanny Abram making an appearance on Manchester Underground Music.

Thank You, in its Original form, is a reasonably uptempo tech-houser with rolling, almost Latin-y beats, vocal stabs that build up into a looped "wanna thank you for the joy you brought me" line and, as the track progresses, jaunty pianos. Not a world-beater perhaps but it'll keep 'em moving for sure. On the B, techno bod Mark Holmes supplies a remix that's probably best filed under 'techno', sure, but also shows a strong influence from cosmic/Italo disco in its use of analogue synth sounds.

About: You can find Manchester Underground Music on Facebook. Meanwhile, other labels the Slovenian producer Mr Abrams has had stuff out on include such TIWWD faves as Savoir Faire Musique, F*** House Music and Punch Underground, as well as many others – find out more at his Soundcloud page.
Posted by Russell at 11:58