Jay West – We Can Change It 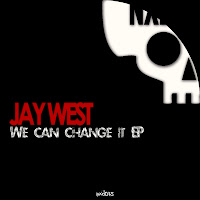 Next up tonight we move from soulful to the techy end of deep, with this latest from Aki Bergen's Neurotraxx Deluxe.

Actually, while this certainly does represent the techier end of the deep house spectrum musically, its mostly-spoken vocal (black, male, American) gives it a soulful feel too so it kinda covers all bases! Said vocal reminds me a little of the spoken intro to Jon Cutler's It's Yours, and sits atop a backing that manages to be sparse and electronic yet warm and luxurious at the same time. Over on the B, I Feel Hype operates in similar territory but is a tad more organic-sounding,  with a breathless, half-spoken/half-sung female vocal telling you that "when you touch me, I feel hype" and getting all poetic on yo' ass.

About: The Neurotraxx stable (Neurotraxx, Neurotraxx Deluxe and Neurotraxx Gold) seem to be one of the hippest labels around right now… and compared to a lot of 'hip' labels, in this case I CAN see what the fuss is all about! Find 'em at their website or on Facebook.

Jay West, meanwhile, is a name that should be familiar to you given that he's had releases on Salted, Conya, Drop, So Sound, Adaptation Music, Funkfield, Lost My Dog and more…
Posted by Russell at 20:11