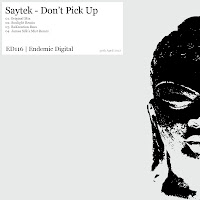 The Original of Don't Pick Up is all thumping bass kicks and sharp higher-end percussion, and as such will probably work best on techno or techno-leaning floors. For those of a housier persuasion, though, Soulight's rub starts off tuff n' tribal but then mellows out into a real head-trip of a mix, while the ReKreation Rmx is a subtler pass still, with most of the relentless hi-hats and tribal fills left out. But the pick for me is James Silk's Mist Remix, which marries straight-down-the-line 4/4s with a big off-kilter b-line and some cool electric piano chords, and adds some looping female vocal snips to the male growls that are present on all four mixes.

Those are all pretty subtle distinctions, though… "cool, chunky tech-house" pretty much covers it really.

About: This is the latest from the Endemic Digital camp… I think it's the first time this veteran producer has had anything out on the label but I could be wrong. If it is though, definitely something of a coup for the Essex boys!
Posted by Russell at 19:39