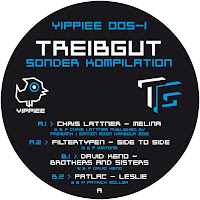 Sometimes a record takes you by surprise… and such was the case here. I'd downloaded this album, listened to a few tracks quickly, went "Yeah, that's cool", flagged it up for review… and then kinda forgot about it till a few days ago, when some random track came up in iTunes and I found myself bouncing around in my seat. The track in question was Jackers Together by Chris Gruber, just one of many top-drawer house gems to be found on this compilation put together by Derrick Montana and Kiatone, aka Filtertÿpen, showcasing the sound of TREIBGUT, their club night in Hannover, Germany.

Generally speaking the mood is deep and techy, with occasional forays into more upbeat, jackin' territory. Highlights include the aforesaid Jackers Together along with Daso's prog-tinged and slightly Garnier-esque Miu Miu, the 303 bassline ride that is Gorge's Frozen Memories, David Keno's Brothers & Sisters (with its "house is the way" vocal and walking bassline that's like a toned-down version of Loverush's Same Old Thing) and Filtertÿpen's funkified, hip-housey Side To Side. But picking highlights is, in a way, superfluous – this is just a fine compilation of house grooves that you most certainly don't want to sleep on as I nearly did!

Out: Now (but only since last week)

About: This comes on fledgling German label Yippiee, who can be found here, while if you want to know more about Filtertÿpen and TREIBGUT you can do so on Facebook.
Posted by Russell at 16:25