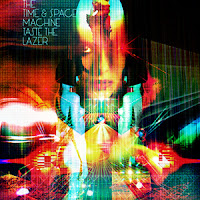 Okay, finally for tonight's albums catch-up we have an album I've been meaning to get around to talking about for ages, the sophomore long-player from Richard Norris's The Time & Space Machine.

The bad news: if you were expecting any huge stylistic shift from T&SM's debut album, Set Phazers To Stun, then you're going to be slightly disappointed. The good news: if you loved that album (and TIWWD certainly did) then you're going to love this one too. As before, freeform psychedelic jams sit atop solid 4/4 kicks aimed straight at the dancefloor. Indian, Arabic and other 'world' rhythms and instruments also have a big part to play, backmasking, chants and mantra-like repetition à la Can are frequently employed, while the epic, big-screen sonic pictures Norris and his cohorts paint would be worthy of the mighty Hawkwind themselves.

David Guetta, Skrillex, Tiesto or Swedish House Mafia fans will certainly NOT be getting into this album. But if your record collection embraces psychedelia, space rock and Krautrock as well as house and techno… if you dig the more 'out there' moments from Faze Action, Bottin or Phenomenal Handclap Band… or if you're just a broad-minded 'EDM' (bleurgh!) lover who's ready to expand their musical palette and listen without prejudice – then you're going to lap this up.

About: In case anyone's just wandered in, it might be appropriate at this juncture to give some background on Richard Norris himself.

Starting his musical journey in punk bands, in the 80s he went on to write for the NME and run UK psychedelic label Bam Caruso, then recorded with Psychic TV's Genesis P. Orridge as Jack The Tab to produce some of the earliest UK acid house records before teaming up with ex-Soft Cell man Dave Ball in The Grid, who were responsible for a string of 90s classics (Crystal Clear, Texas Cowboys, Floatation and the Marmite-esque Swamp Thing). He worked with his long-term friend Joe Strummer on the Grosse Pointe Blank soundtrack, and wrote Paul Oakenfold's official biography. In more recent years, he's teamed up with Erol Alkan in nu-disco pioneers Beyond The Wizard's Sleeve, while simultaneously bringing his early love of psychedelia and his later electronic work together in the genre-defying The Time & Space Machine. Basically, he's done it all and we're not worthy… despite that, I interviewed him one time and he seemed like a thoroughly decent, down-to-earth sort of chap to me!

On a more prosaic 'about' note, this comes on Tirk Recordings.
Posted by Russell at 22:26