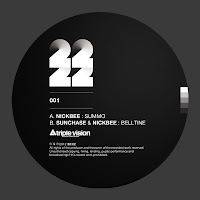 Ukrainian D&B… that's a phrase you don't hear very often. Possibly because this is the debut release from a label called 22:22, which claims on the hype sheet to be the very FIRST Ukrainian drum & bass imprint. I have no way of checking whether that's true or not, but that said, I have no reason to disbelieve them either!

But either way, this is their first release, and it's actually rather good. Nickbee gives us Summo on the A, a midpaced roller with middle eastern/Indian-sounding flourishes and lots of rasping bass that stops just the right side of stoopid, while over on the B, he teams up with label owner Sunchase for Belltine, a slightly more hi-octane affair with a liquid-y feel but a jump up-inspired sound palette.

About: The label may be new to the scene but Nickbee and Sunchase aren't, having had previous releases on the likes of Moving Shadow, Hospital, Cyclone, Drone Audio and Noisia's Invisible. Anyway, here's where you can find 22:22 online and here's Nickbee and Sunchase's respective Soundcloud pages. You can HEAR THIS at either of the latter.
Posted by Russell at 16:34