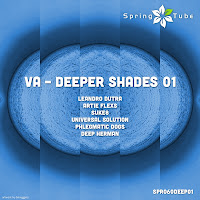 Normally known for progressive house vibes – sometimes of the deeper, more satisfying variety but sometimes veering a little too far into shiny, trance-y territory –  here Russia's Spring Tube flip the script in a most pleasing fashion, serving up a whole album of the deep stuff, which we're promised will be the first in a series.

And if you were wondering if they'd do it properly, then the inclusion of two tracks from sometime Lost My Dog contributor Artie Flexs should go some way towards setting your mind at rest. There are ten tracks in total, coming from the aforementioned Mr Flexs plus Deep Herman, Universal Solution, Suke 8, Phlegmatic Dogs and Leandro Dutra, and generally speaking the vibe ranges – to take two tracks more or less at random – from the deep, floaty prog of Universal Solution's The Way Back to the dubbed-out, sub-aquatic deep house of Deep Herman's Three Fast Days (one of the album's standouts for me).

If lazy, stoner-friendly deep and progressive house grooves sound like a pleasant way of spending 71 minutes to you then trust me, you won't be disappointed with this set… I'm looking forward to volume 2 already.

Out: Last week… but I'm a bit behind with albums and I'm gonna be trying to catch up a bit over the next few days, so deal with it :-)

About: This is Spring Tube's 60th release, and you can find out more about 'em from their website and Facebook page.

Intereresting to note that another Russian prog label, Incepto Music, has recently launched an Incepto Deep offshoot… could the Russians finally be moving on from their long obsession with prog, electro and trance? We live in hope!
Posted by Russell at 19:44