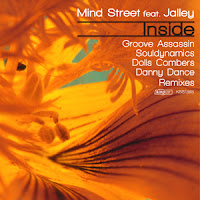 The hype sheet bills this as the debut release from this French outfit, though whether that's their very first release anywhere ever, or just their first on King Street, I'm not sure.

Either way, Inside is a rolling soulful house groover featuring a full male vocal, coming with remixes from  Groove Assassin, Dolls Combers, Souldynamic and Danny Dance, on top of the Mind Street Friendly Remix which I guess counts as the 'original' in this case*. The various mixes don't vary hugely: most are in a fairly traditional-sounding vein and as such, any of 'em should serve your soulful floor nicely, but if pushed I'd plump for the Groove Assassin Classic Remix, with its organs and space disco synths… or the Danny Dance Dub Vocal, which is the exception to the rule in that it's a more stripped-down and pumped-up pass that could see this reaching beyond the soulful house diehards.

About: You may have heard this before if you picked up the King Street Miami 2012 sampler. Anyway, you can find King Street online here.

*Actually, I've just realised that the full version of this release does included an Original original… they just haven't promo'ed it. Which seems odd but there go!
Posted by Russell at 19:52