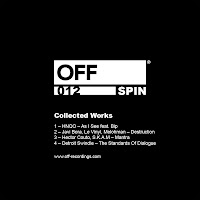 Speaking of labels you've got to hand it to… what I love about OFF Recordings is you never know quite what you're gonna get. One OFF release can be soulful/garage-y, the next tuff and techy… as long as it's good music they don't care too much for pigeonholes, which is how it should be.

It's no surprise, then, that this four-track sampler EP takes in a range of styles. The EP opens with HNQO feat Bip's As I See, a deep/tech chugger with a fat, chunky b-line and a breathy spoken female vocal. Oddly reminiscent of Superstars Of Rock's classic Orange Sunshine in places, you'll recognise it from the "D to the O to the O to the D… E.P.M.U.S.I.C… go!" refrain – though as to what 'Dood EP Music' means, your guess is as good as mine.

Javi Bora, Le Vinyl and Melohman are up next with Destruction, a low-temperature techy groove with an "annihilation… destruction" vocal hook, female wails and a tuff, no-nonsense bottom end, which is followed by Mantra from Hector Couto and S.K.A.M, a more peaktime kinda cut that sits on the deep house/nu disco borders and works a voal sample lifted from Mainline (the Jason Load version, not the Black Ivory one – as also sampled by Love Revolution's Give It To Me Baby back in the day).

Finally, Detroit Swindle's The Standard Of Dialogue is another cut that owes a great deal to classic early 90s NYC – the "hehs" in particular recalling House Of Gypsies' Samba, so much so that it MIGHT actually be a sample, though I'm not 100% sure – and that's topped with a black power/conscious rap-type (second) vocal exhorting "motherfuckers" to "realise" and "reject mediocrity" and so on.

Ageing disco dolly that I am it's Mantra that wins out for me, with Detroit Swindle coming a close second. But it's all good, as they say.

About: You can find OFF Recordings in all the usual places, such as… leading social network Facebook! Cloud-based audio sharing service Soundcloud! And at their very own homepage on the World Wide Web! Isn't the 21st century marvellous, eh?
Posted by Russell at 14:01