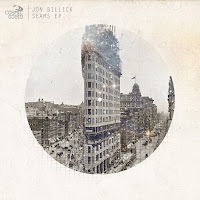 If there's a better way of starting the week than with a slab of very deep house sporting a classic vocal sample then TIWWD doesn't know what it is.

The sample in question is a line from The Fog's Been A Long Time, and on Avenidas Los Noches here it's placed over a melancholic Rhodes-and-kicks backdrop to devastating effect. Elsewhere on the EP, Seams itself is another thoughtful late-night ride for all the sofa-surfers out there, Public Enemies (credited to Jon Billick & Zweistein) is a slightly more uptempo affair with jazzy leanings and Roller King is another very deep cut but this time with a somewhat sunnier, less introspective kinda feel.

All four tracks are very cool but Avenida La Noches is the one – it's just gorgeous. That said, Seams isn't far behind…

About: Jon Billick hails from NYC, but this comes on Dutch label Cosmic Disco – find 'em on Facebook, on Soundcloud or at their own website.
Posted by Russell at 10:28