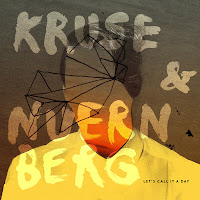 Well, here's an album that took yours truly somewhat by surprise. The Hamburg-based duo of Florian Kruse and Nils Nuernberg have long been TIWWD faves, having emerged back in the late 00s with their trademark deep, deep house sound. But on this their debut artist full-length, there's scarcely a straight-up deep house cut in sight.

Instead, it's an album that takes in a wide range of influences, from indie to ambient to the epic, anthemic stadium techno/electronica of Laurent Garnier. The nearest I could come to a description for a lot of it would be to think the grown-up dance-pop of someone like Hot Chip or Moloko, given a little bit of Underworld-y sinuous, pulsing drive. Stee Downes lends his (white, male) tonsils to several of the album's stand-out cuts – both Last Chance and Love Can't Break You Down have 'Ibiza anthem' potential – but for me the real highlights are those featuring the jazzual vocal stylings of Nathalie Claude. Float will delight the Shelter/Body & Soul/Southport heads, while Leaves Falling comes on like Crazy P and Nicolette at a reggae jam.

I'll be honest, I wasn't convinced by this album on first hearing, but after a dozen or so listens it's grown on me. We were talking about dance music clichés the other day, and "a proper album, not just a collection of 10 club cuts" is certainly one of 'em. Well, I've never actually had a problem with albums full of club cuts – if that's what you do, that's what you do, innit? But here K&N have gone down the "proper album" route, and to be fair, it works. Whether it will fulfil what is presumably its goal – to introduce K&N to a wider audience – only time will tell.

About: This comes on Fred Everything's Lazy Days Recordings. Their website seems to be down so for now here's their MySpace and Fred's own Soundcloud page, plus the link for their podcast series, and here's Facebook and Soundcloud links for Kruse & Nuernberg themselves.
Posted by Russell at 20:34