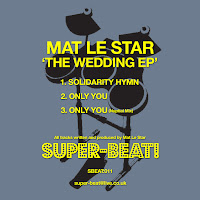 Apparently the reason this is called The Wedding EP is that all the tracks were written around the time of Mat Le Star's marriage to "long-term girlfriend and sometime vocalist Danielle". And there's me thinking it was gonna be a cheeky booty with Single Ladies and I Gotta Feeling on one side, and Let's Twist Again and The Locomotion the other…

Instead, it's a three-track affair with two mixes of Only You and one of Solidarity Hymn, and… well, what can I say? It's a deep/tech affair that's so 'now' and so 'skinny-jeaned east London hipster' it hurts, which isn't necessarily 100% a good thing. But it'll work on the floor I'm sure, and Solidarity Hymn features some cool hip house-style vocal inserts, so it's worth checking. Even if the vocal on Only You does sound worryingly like Tony Di Bart… or possibly that bloke out of Maroon 5.

Now then, Moves Like Jagger… there's a future wedding disco classic for ya. And I think you'll find that's where we came in.

About: This comes on UK label Super-beat!, who mainly seem to exist on MySpace, weirdly enough. Maybe that's some kind of uber-hip thing as well – someone (a genuine certified Young Person) did recently tell me that "not being on Facebook is the new being on Facebook", after all.
Posted by Russell at 16:22