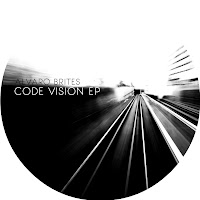 We stay in the late-night jacking zone with this four-tracker from new UK label Question Of Time.

Alvaro Brites is a Portuguese producer who was based in London for a while but now resides in Sao Paulo, Brazil, and here he serves up four quite varied cuts. Code Vision itself is a sparse, funk-fuelled throbber made for very late hours in the proper deep house joints, Constantino is a more prog-tinged and slightly more uptempo offering but also comes with a seriously deep, techy Dub, while finally Interlude is a more out-there, late night affair.

Code Vision or the Dub of Constanino stand out for me but it's a strong EP all round.

About: You can find Question Of Time Records on Facebook. This is their fifth release.
Posted by Russell at 19:57