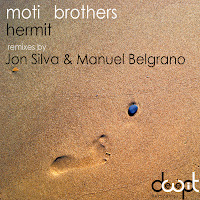 I do try, in all honesty and in all seriousness now, NOT to keep filling this blog with the same old labels week in, week out. Don't want TIWWD to seem like some kind of back-scratching boy's club or something. To that end, when I come to review stuff I make a point of never looking at the hype sheet or the artwork until I've decided what I want to say… that way I don't know what label stuff's on and can't be swayed.

So damn DeepWit Records for being so consistently on-point that there's not a lot I can do about having to pour praise most profuse on their latest release yet again. Damn Moti Brothers for the gorgeously unhurried, uncluttered deep house groove of Hermit. Damn Jon Silva for the elements of old skool garage AND rave (just listen to those early 90s-sounding stabs) in his slightly skippier refix. And most of all God DAMN Argentina's Manuel Belgrano for a heads' delight of a deep, throbbing Overdose Mix that pretty much redefines the word 'awesome'.

Damn them. Damn them all.