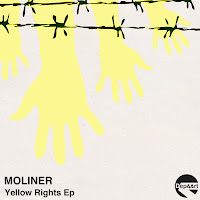 It's a simple two-track job. On the A, Yellow Rights is a relatively uptempo affair but still with a space-y, dreamy vibe overall, and features sampled, Civil Rights-era preacherman vox. On the B, Emilia goes deeper still, a lazy, laidback, late-night affair with mucho orchestral strings and a musical palette that's constantly evolving and shifting, all topped off with another spoken, sampled vocal (a French bloke saying "the reaction you are going through is totally unknown", in this case).

About: Depaart is the brainchild of rising Spanish star Georgeous (who incidentally had an EP out on Influential House called Kinda Disco last week… only I never got round to reviewing it, as I'd planned to, and I haven't done last week's So Many Tunes round-up yet. But hey, I'm telling you now) and this is their second release. As per usual you can find ’em on Facebook, on Soundcloud or at their own website.
Posted by Russell at 20:41