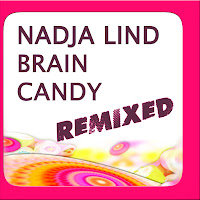 Sometimes it's hard to know what to say.

Regular TIWWD readers will know I'm a big fan of that Klartraum/Lucidflow sound (Nadja being, for the uninitiated, one-half of the former and co-owner of the latter) so when I tell you that here, Ms Lind serves up a whopping 22 remixes of tracks from her outstanding solo album Brain Candy… and that those 22 remixes come from such highly respectable names as Hernan Cattaneo, Sasch BBC & Caspar, Helly Larson, Saytek and Deep Spelle… well then, you know I'm going to tell you that this album is a total must-buy, don't you?

So then I'm left wondering, "what else can I tell 'em?". I'm not going through all 22 tracks one-by-one saying "this one's a bit more dubby" or "this one has tougher kicks" because, y'know, there's 22 of them. So that only leaves me to point out that if you're already a fan of the Lind/Klartraum/Lucidflow style of deep, dubby, atmospheric techno then you'll have no cause to be upset by any of the rerubs here; yet at the same time, between them there's sufficient stylistic variation to keep the album interesting and to potentially attract a wider audience as well.

But then I would say that, wouldn't I, being a fan n' that? So to hell with it… just buy the damn thing. It's superb, frankly.

About: You can find Lucidflow here, here and here (website/Facebook/Soundcloud)
Posted by Russell at 20:21