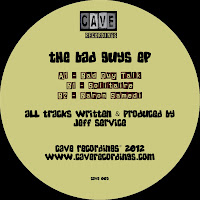 This is a very strange record…

Actually in one way it's a perfectly normal record, for our world. It's got three tracks on it, with the overall vibe being tuff-ish tech-house. Baron Samedi has a little added disco sheen while Solitaire, with its filters and sampled, chopped n' chipmunk'd R&B vox, veers even closer to hi-octane disco house of the Bid/Nocturnal/Stardust Music variety.

The reason I say it's odd, though, is the (sort of) title track. Again, tuff tech-house is the general idea, with a little of that lollopoing Balkan/swing vibe and some abrasive stabs reminiscent of vintage R&S hardcore… but it's the use of the vocal, see? It's weird, see? Specifically, because it's a Dave Chapelle sketch with him doing Edward G Robinson/Jimmy Cagney impressions.

I'm not sure how it'd go down on the floor but it'd be interesting to see, and Bad Guys Talk certainly takes the prize for being the week's quirkiest release. It's how he talks, see?

About: Jeff Service hails from Arizona but this comes on new New Zealand label Cave Recordings. It's only their third release so show some love by visiting their website and Soundcloud and Facebook pages. Hit up the latter and you'll see they describe their sound as "jackin' tech", which on this evidence I'd say is about right!

PS Dave Chapelle = very funny black US comic who's big in the States and weirdly unknown in the UK. I've got a DVD, if you want to borrow it… oh and I found the sketch on YouTube as well!